“In adapting the original story, we worked with designers and artists to come up with a new interpretation of the cat-like claws that are described in the book,” the statement continued. “It was never the intention for viewers to feel that the fantastical, non-human creatures were meant to represent them. This film is about the power of kindness and friendship. It is our hope that families and children can enjoy the film and embrace this empowering, love-filled theme.”Hathaway’s character, Grand High Witch, is seen in the movie with missing fingers, which is similar to the limb abnormality ectrodactyly — also known as “split hand.” The condition manifests as the absence of one or more fingers or toes on the hand or foot. 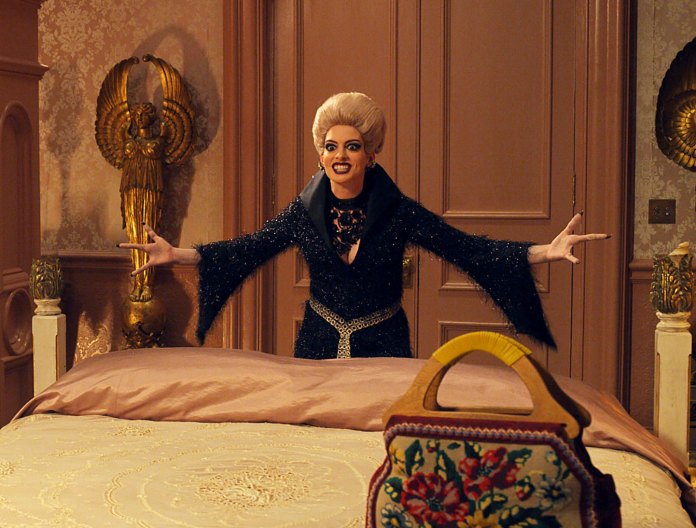 Anne Hathaway as Grand High Witch in ‘The Witches’. Courtesy Warner Bros. PicturesBritish Paralympic swimmer Amy Marren was among those who called out the film’s depiction of Grand High Witch. “Disappointed in the new Warner Bros film The Witches…I myself am a huge advocate of celebrating differences and especially limb differences,” she wrote via Twitter on Monday, November 2. “It’s not unusual for surgeons to try and build hands like this for children/adults with certain limb differences and it’s upsetting to something that makes a person different being represented as something scary.”- Advertisement – The Princess Diaries star has yet to comment on the controversy, but she told PopSugar in October that she was “really swinging for the fences with the performance” and decided to “put my own spin on it.”Listen to Watch With Us to hear more about your favorite shows and for the latest TV news! The athlete, 22, added: “Yes, I am fully aware that this is a film, and these are Witches. But Witches are essentially monsters. My fear is that children will watch this film, unaware that it massively exaggerates the Roald Dahl original and that limbs differences begin to be feared. This opens up all new difficult conversations for those with limb differences and sets back what we are trying to achieve which is to celebrate who you are!”The Witches was released on HBO Max on October 22. The film is a remake of the 1990 movie and based on Dahl’s 1983 book, which describes the titular characters as having “square feet with no toes” and “claws instead of fingernails.” The new adaptation stars Hathaway, 37, Octavia Spencer, Chris Rock, Stanley Tucci and Jahzir Bruno and follows a group of witches who plan to turn children into mice.- Advertisement – Time for a mea culpa. Warner Bros. issued an apology after people with disabilities spoke out against the depiction of Anne Hathaway’s character in the HBO Max remake of The Witches.A Warner Bros. spokesperson said in a statement that the company was “deeply saddened to learn that our depiction of the fictional characters in The Witches could upset people with disabilities,” adding that it “regretted any offense caused” by the film.- Advertisement – – Advertisement –